Former US President Donald Trump lashed out at American Jews on Sunday, asking them to “get their act together” and accusing them of not being appreciative enough of his support for Israel, while claiming he was so popular with Israelis that he “could easily be” elected prime minister.

In a statement posted to his social media platform Truth Social, Trump argued that “No president has done more for Israel,” and wondered why “our wonderful evangelicals appreciate this far more than the people of the Jewish faith, especially those , who live in the United States.”

The former president – who moved the US embassy to Jerusalem, recognized Israeli sovereignty in the Golan Heights and brokered the Abraham Accords between Israel and regional states – said that in Israel it was “a different story” and that there he enjoyed “the highest approval “rate in the world,” going so far as to say that he “could easily be prime minister.”

Trump called on Jews in the United States to “come together and appreciate what they have in Israel – before it’s too late!” He did not elaborate.

Trump has frequently criticized American Jews for their perceived lack of gratitude and support, often conflating Israeli interests with those of American Jews.

A poll conducted by the Israel Democracy Institute in November 2020 found that 70 percent of Jewish Israelis considered a victory for Trump over Joe Biden in the US presidential election to be preferable for Israeli interests.

While many American Jews generally support Israel, they have consistently rejected accusations of dual loyalty to the Jewish state, typically seen as an anti-Semitic canard.

“American Jews got ‘their act’ in 2020 with 77% supporting Biden. This will not change because Jews view Trump and #MAGA candidates as extremist threats to our security, democracy and values, as epitomized by this anti-Semitic reprisal ,” tweeted Halie Soifer, head of the Jewish Democratic Council of America. “This has nothing to do with Israel.”

“We don’t need the former president, who panders to extremists and anti-Semites, to tell us about the relationship between the United States and Israel. This is not about a quid-pro-quo; it rests on shared values ​​and security interests. This ‘ Jew explanation’ is insulting and disgusting,” he said.

In an interview in December, Trump accused American Jews of not loving Israel enough and of being ungrateful for all he had done for Israel.

He also charged that Israel used to have “absolute power over Congress.” He said today was “the exact opposite” and pointed the finger at former President Barack Obama and current President Biden for orchestrating the apparent power shift.

His statements were met with fury, and notable Jewish organizations accused him of using anti-Semitic tropes. 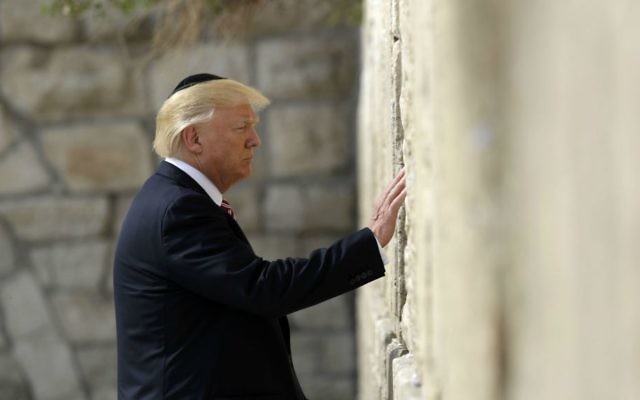 US President Donald Trump visits the Western Wall on May 22, 2017 in Jerusalem. (AP Photo/Evan Vucci)

“Past support for Israel does not give him license to trade in radioactive anti-Semitic tropes – or to peddle unfounded conclusions about the unbreakable ties that bind American Jews to Israel. Enough!,” read a tweet posted by the American Jewish Committee .

Trump made similar comments in the past, which were met with similar responses.

In a speech to the Israeli American Council in December 2019 as part of his election campaign, Trump tried to convince the Jewish audience to vote for him, highlighting his relationship with Israel and lamenting what he said was insufficient support for Israel , and subsequently for him among American Jews.

In August of that year, he questioned the loyalty of Jews who vote for the Democratic Party, drawing a harsh response from the Jewish Democratic Council of America, which accused the then-president of trying to “weaponize and politicize anti-Semitism” for political gain .

Truth Social was launched in February 2022 as Trump’s response to his ban on Twitter and two-year suspension from Facebook following the January 6, 2021 attack on the US Capitol.

Israeli elections are approaching once again — this time on November 1. How did the electoral system become so dysfunctional, and what could resolve the repeated deadlocks?

The Times of Israel is proud to present a new limited series podcast, Paralyzed Nation: How Israel’s Dysfunctional Electoral System Can Still Be Fixed. Our political analysts and journalists turn your questions about the burning questions facing Israeli voters today.

Only available to ToI community members.