If you’re planning to take a trip this winter, now is the time to take the plunge for the best prices on airline tickets. Some travel experts recommend securing holiday flights before Halloween because prices typically increase significantly as Thanksgiving approaches.

Here’s what else you need to know Get up to speed and start your day.

(You can get “5 Things You Need to Know Today” delivered to your inbox daily. Sign up here.)

Air raid sirens sounded in several regions of Ukraine today after Russia launched new missile attacks. This comes after Russia unleashed a wave of attacks across Ukraine on Monday that killed at least 19 people and wounded more than 100 others, according to Ukrainian officials. Critical infrastructure was hit in several regions and in the capital Kiev, where dozens of fires broke out, according to Ukraine’s emergency services. Several areas in the region are still without power today after the flurry of Russian attacks, which in part targeted energy facilities to leave Ukrainians without electricity. President Joe Biden spoke Monday with Ukrainian President Volodymyr Zelensky, condemning the attacks and pledging continued U.S. security assistance “including advanced air defense systems.”

The threat of a freight train strike is back after a major union of rail workers on Monday rejected a tentative deal with the country’s freight companies. More than half of the 23,000 members of one of the biggest rail unions opposed the deal, meaning the two sides will now enter negotiations in the hope of reaching an agreement. Without a new agreement, there could be a strike that significantly affects the country’s already struggling supply chains. But such a strike would not happen until November 19, according to the union. The Biden administration has been desperate to avoid a strike because major railroads carry 30% of the nation’s freight, and a strike could cause shortages and higher prices for essentials like food and gasoline. A strike could also force factories without parts to close and leave store shelves empty during the Christmas shopping season.

The Romans: There is a move here for a better quality of life

New emails released by the General Services Administration debunk claims by former President Donald Trump and his allies that the government agency is to blame for packing White House boxes that ended up at his Mar-a-Lago residence after his presidency. Former presidents are allowed to take certain government materials and office equipment to establish a permanent office away from the White House. But that doesn’t include the kinds of classified documents Trump brought to Mar-a-Lago — which are at the center of an ongoing criminal investigation by the Justice Department. Trump and his allies have said the GSA was responsible for classified documents being at his Florida home. However, the newly released emails make it clear that the boxes were already packed and sitting in an empty office space.

Prosecutors and defense attorneys will present closing arguments today at the sentencing hearing for the Parkland school shooter. This will be the last opportunity for them to plead their cases before the jury will help decide whether the gunman should be sentenced to death or life in prison. The impending end of the trial comes nearly a year after the 24-year-old shooter pleaded guilty to 17 counts of murder and other charges in connection with the February 2018 massacre at Marjory Stoneman Douglas High School in Parkland, Florida, in which 14 students and three teachers employees were killed. Separately, in Uvalde, Texas, the school district’s superintendent announced his retirement Monday after new details emerged about the Robb Elementary School massacre, which left 19 students and two teachers dead.

Families of victims and surviving witnesses in the Parkland shooting trial

The National Transportation Safety Board has recommended a new vehicle system that could prevent drivers from speeding. The technology essentially recognizes speed limits and either provides visual or audible warnings when a driver is speeding, or prevents vehicles from exceeding those limits. New York City has become the first city in the United States to test the speed-limiting technology in 50 of its fleet vehicles. “There’s no reason today, with so much technology and so much awareness, that anyone should die at the hands of a car,” said Meera Joshi, New York City’s deputy mayor for operations. After more than 20,000 deaths on American roads this year alone, the NTSB has called on the federal government to start encouraging automakers to put speed-limiting systems in new cars, according to a report. It will be up to the car manufacturers whether they introduce the technology.

“Everything I expected to see was wrong,” Shatner wrote in a new biography. Learn about the actor’s life-changing experience aboard a suborbital space tourism flight.

A former pizza shop worker is now earning his dough in the NFL! Read his inspiring story here.

How Dogs Changed the Course of Civilization

Did you know that dogs were the first animal ever domesticated by humans? Here’s how adorable fur babies became a part of our daily lives.

Michael J. Fox and Christopher Lloyd’s reunion delights ‘Back to the Future’ fans

The pair had an epic reunion at Comic Con 37 years after the release of the sci-fi comedy. (Can you believe it’s been 37 years? Take a moment to remember the good old days).

Shaquille O’Neal reiterates his desire to buy an NBA team

The four-time NBA champion shared a cryptic message about his desire to buy an NBA team “back home.” Here are some possibilities where it could be.

Eileen Ryan, a veteran actress and mother of actor Sean Penn, has died, Penn’s publicist said in a statement. She was 94. Ryan starred in more than 60 television shows and movies during her long career, including the acclaimed films “Magnolia” and “I Am Sam.”

That’s the award Dustin Johnson won after winning the inaugural LIV Golf Championship, tournament officials announced Monday. The 38-year-old switched from the PGA Tour to the Saudi-backed rebel series in June. The controversial LIV Golf series has created rifts in professional golf as LIV golfers have been banned from the PGA Tour for participating in the breakout series.

“No child should ever be subjected to such racist, mean-spirited and dehumanizing comments, especially from a public official.”

– Los Angeles City Councilman Mike Bonin and his husbandissue a family statement after his fellow council member, Nury Martinez, made racist remarks about him and his black child. In leaked audio obtained by the Los Angeles Times, Martinez says Bonin, a white man, showed up with his son on a float in a Martin Luther King Jr. Day parade and “treated his young black son like he was an accessory.” The Times reported that Martinez also said of Bonin’s child, “Parece changuito,” or “He’s like a monkey.” Following the backlash for a series of offensive comments heard on the audio, Martinez resigned as Los Angeles City Council president on Monday.

Fall temperatures in the Northeast as rain hits Florida

How the rainbow flag became a symbol of LGBTQ pride 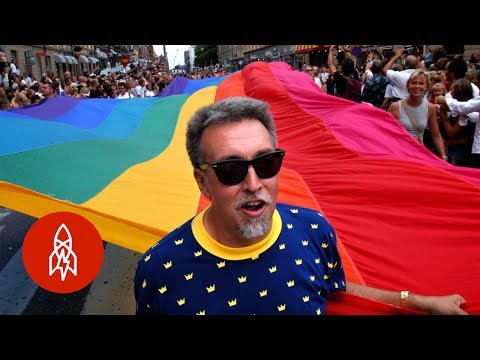 Today is National Coming Out Day

Every year on October 11, National Coming Out Day celebrates the act of “coming out” — when an LGBTQ person decides to publicly share their gender identity or sexual orientation. Watch this 2-minute video to learn how the rainbow flag became a symbol of LGBTQ pride. (Click here to view)